Sometimes it feels like not much has happened in the last week or two, but actually if I reflect back, Space Warfare: Infinite has made some pretty good progress. 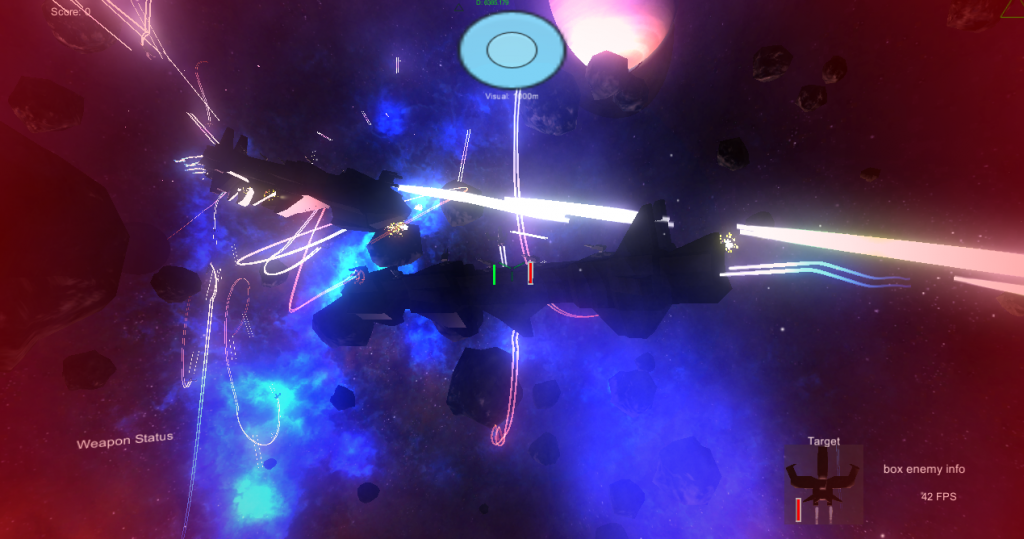 One of the key features of the ultimate vision of the game is in. It needs to be refined and tested, but the core functionality is there. (Meaning you can do it, but sometimes the game breaks…) You can now switch between ships in your fleet! You can be flying along fighting in your tiny fighter and then press a key and swap to a big capital ship destroyer. Fire off a few beam blasts and jump into another ship. The ship you left will keep flying and fighting as the AI takes over.

The ultimate idea is that you can choose to effect the outcome of the battle in all different capacities and see the battle from all different perspectives. Eventually you will be able to give some basic tactics at the beginning of the battle to each ship in your fleet and then during the fight you can issue commands – currently just in the Comm menu– but probably eventually in a little more RTS-ish like a holographic command screen on a command ship. 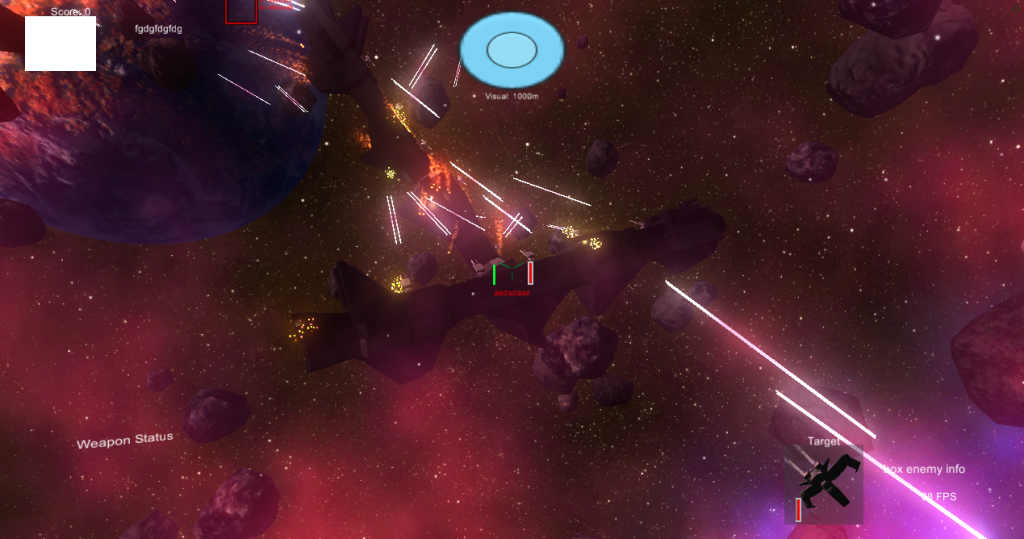 Another thing that wasn’t possible a week ago was capital ships doing anything other than sitting in one place and firing from their turrets. While that was cool, its not very practical for a giant flying behemoth covered in guns to sit in one place while fighter ships dance circles around its turrets. So now the AI is hooked up — cap ship specific AI maneuvers are still a work in progress — so the capital ships will fly around and slowly chasing things and try to hit them with the ‘big dumb guns’ on their bow while their turrets focus on whatever catches their attention. 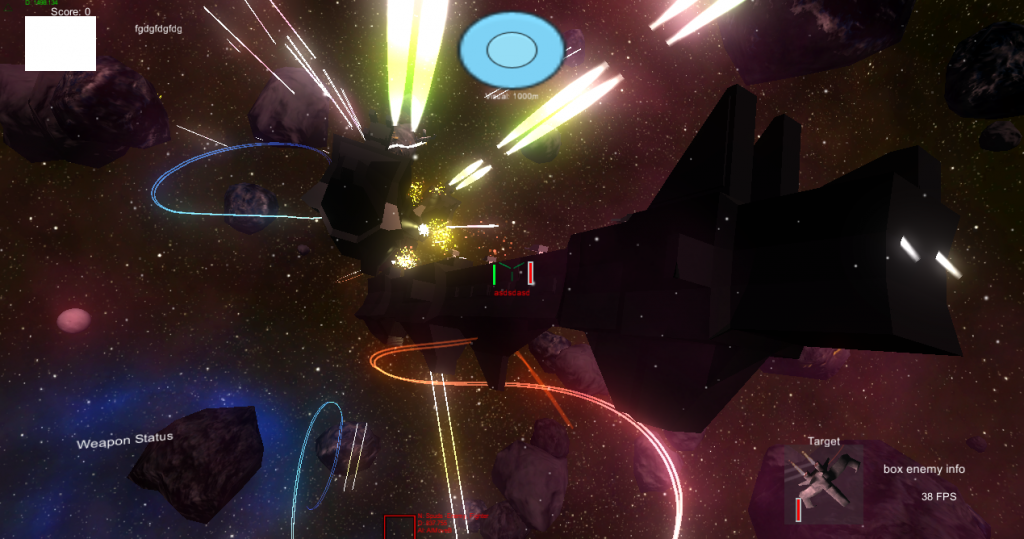 Capital ships helped add a new feature to ships and AI – the idea of types and classes. Now AI can look for enemies in their own class size and choose to only attack those. What this means is that if a I set a big capital ship like a Destroyer to only attack other ‘Large’ class ships, it will not try to chase fighters and instead will try to aim its big guns at other big less nimble targets. The turrets currently run on their own AI so they do whatever they’ve been set to do. Fighter turrets look for fighters, anti-cap turrets aim at big ships, point defense targets incoming missiles. Eventually AI and the player will be able to command turrets to attack selected targets or get all turrets to focus fire. This will truly be the way to take down the bigger ships faster. The big ships have an absurd amount of armour and hull strength, but don’t actually last long when hit with powerful guns. Fighter cannons take more rounds than most fighters have and thats with every round hitting only one side of the armor.

So not only do Capital Ships fly on their own, but now the player can control one too. At the moment this means you can fly it around, roll it so the turrets have a good angle to pick up targets, point it in a direction and fire a giant plasma cannon or a beam weapon from the front. Eventually more controls will come — like commanding all the turrets, launching fighters from carriers, commanding other ships from a bridge, launching nukes, managing shields and power.

Additionally, the capital ship controls made the need for new cameras to be added. Trying to fly a kilometer long skyscraper through a combat situation from a first-person or even a third-person perspective is somewhat difficult. A middle mouse button orbital camera was added so that you could get views from various angles around the ship as well as zoom out to see what is around. I’ve also added an FPS mouse look that puts you in the middle of your ship / or your cockpit on the fighter and allows you to look around and behind you. I am mapping these to the F1-12 keys like in Privateer and Wing Commander games. I have a bunch of directions plus the orbit and mouse look setup in there. The functionality is there, but I am still working to make it better. 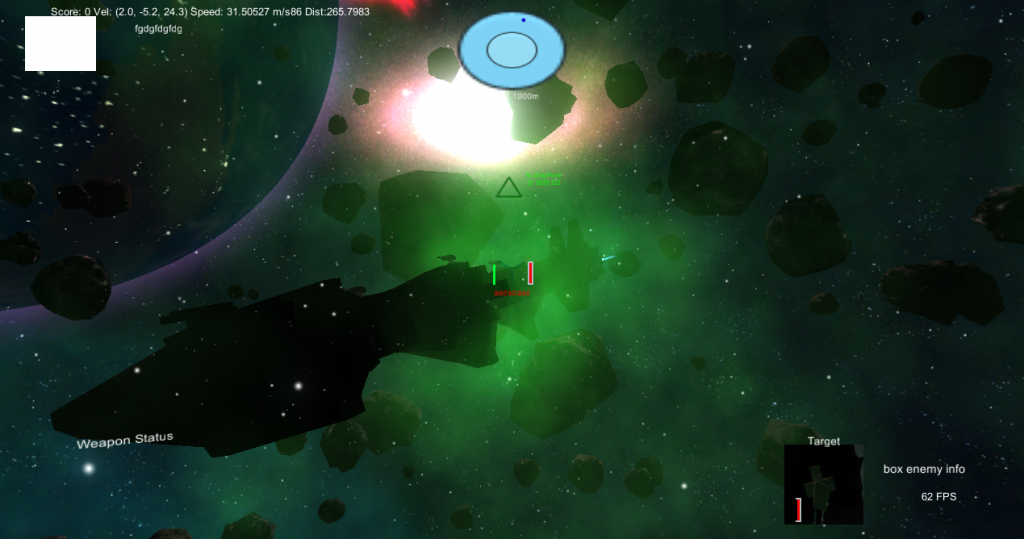 I also upgraded to Unity 5 because I keep looking at the graphics advances, the new physics engine, and the frame rate boosts and just needed to make the jump. I thought the move would fix a turret issue I had where my turrets were spinning my ships – but I think the way I finally fixed it probably worked in Unity 4.6 as well. My problem involved wanted to have turrets (and other future stuff) be able to take their own damage and be targeted and destroyed. The turrets move but are children of another big damageable rigidbody thing as well. But I needed a collider and a rigidbody on the turrets so that hits would register on them. Every time I did this the turret or turrets would spin the ship, fly off the ship into space, stay on the ship but turn on their sides. Anyway, rumor has it you didn’t need a rigidbody on a collider in Unity 5, but that doesn’t seem to be true. I understand that now moving a static collider doesn’t result in a penalty, but I guess it wasn’t the same as my problem. Anyway, I figured out that if I turned my colliders into triggers on the turrets, they’d stop messing with my ships, stay in place and take damage. I don’t know if this is best practice but it works! I need to make sure other triggers are not included on the collision layer mask for projectiles, but other than that it works!

So while Unity 5 didn’t really solve my issue, it did speed up the game. I seem to be able to get more stuff going on the screen than before while still getting a decent FPS. 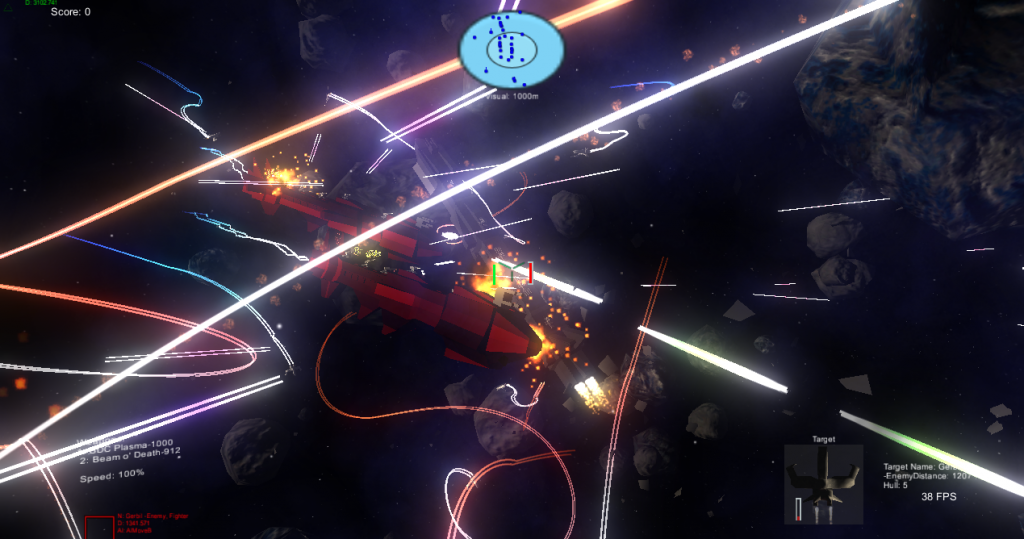 One downside was most of my scripts lost their inspector set variables and the UI doesn’t know where any of its components are. I’ve been slowly fixing it all, but things are a little scrappier at the moment. A few above screenshots have white boxes where UI is supposed to be, that was the most noticeable Unity 5 upgrade effect! It slowed work on other stuff down for sure. I am hoping tho that now that I am up and running with Unity 5, I can make use of the new shader and its better use of threading to keep the game fast and furious.