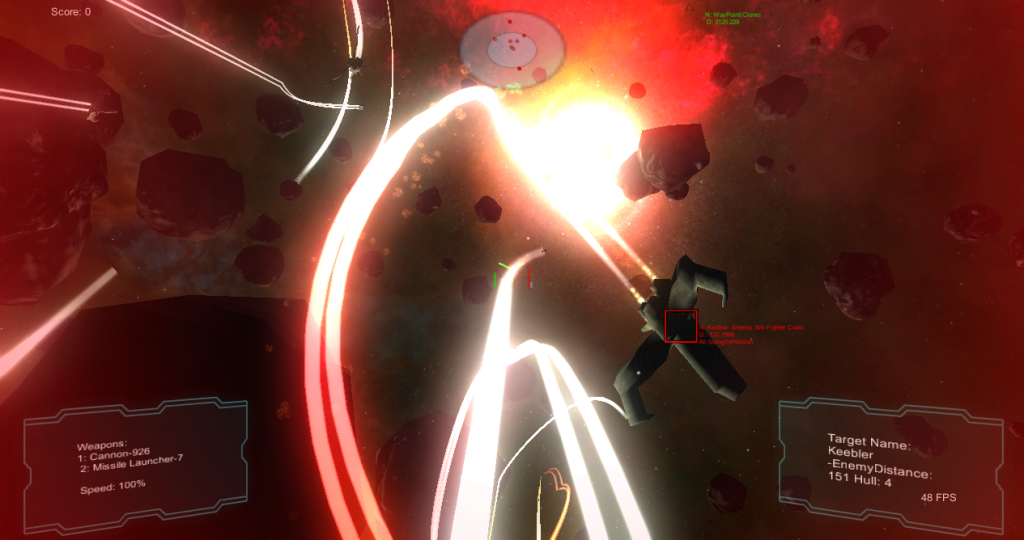 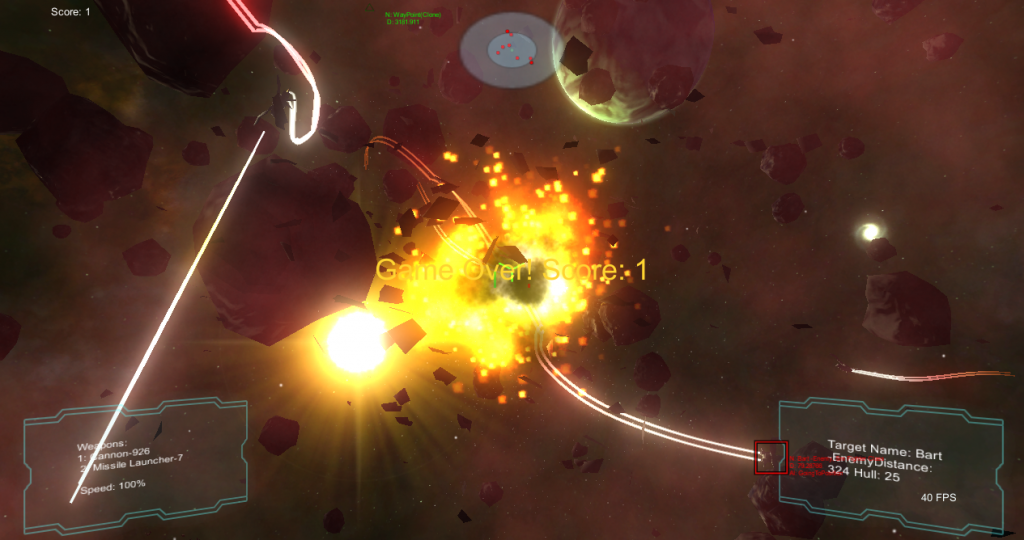 It’s hard to remember exactly what I’ve added from update to update and I hope to make more regular blog posts to keep track. Over the last week I’ve been doing more under the hood work as well as some random visual stuff to go along. 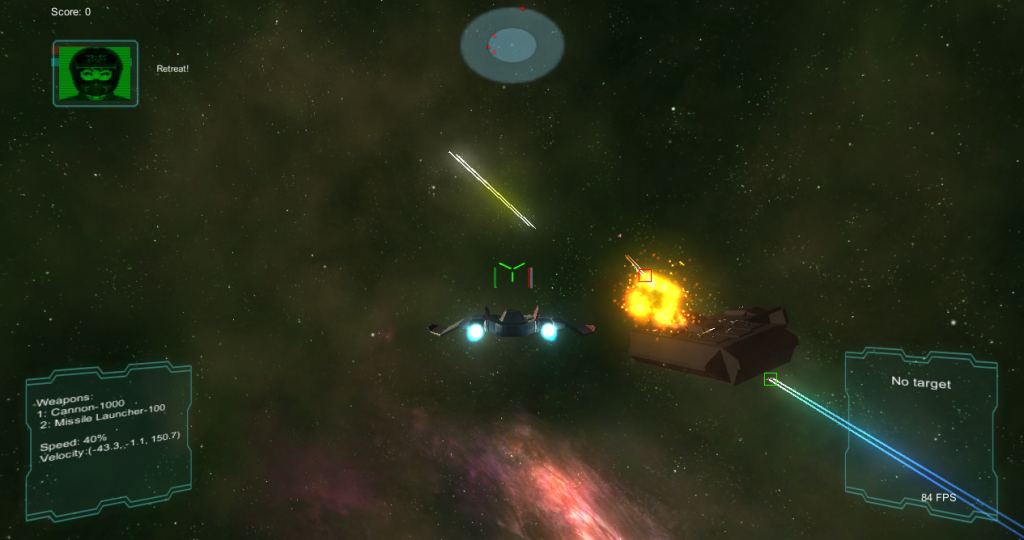 One major addition is point defense turrets (unique 3D model pending – for everything in the game really) that targets missiles and does a pretty ok job destroying them. The idea is that big slow moving nuke missiles fired off during capital ship battles will get knocked out of the sky — unless some ace fighter pilots can get in there and save take out those turrets! (We’ve got to justify fighter craft existence in some way right?) The code for my turret targeting had to be modified so that they could be choose to target something other than ships. This will probably come in handy one day when we want stuff to shoot bases or asteroids or cargo.

On a side note – My test model of a cap ship is a basic wall of turrets and no energy limits or management has been implemented yet, but I am sure in the future ships will not be impossible walls of laser cannons. I have some thoughts on how that would work in the future. I figure I will make ships in a component type way where you need segments to hold various things like power cores, munition bays, barracks etc. The segments will be physical chunks of the capital ship increasing the size and mass. Bigger can be heavy on fire power, but they are going to have blind spots and attack vectors that small fighters can exploit. 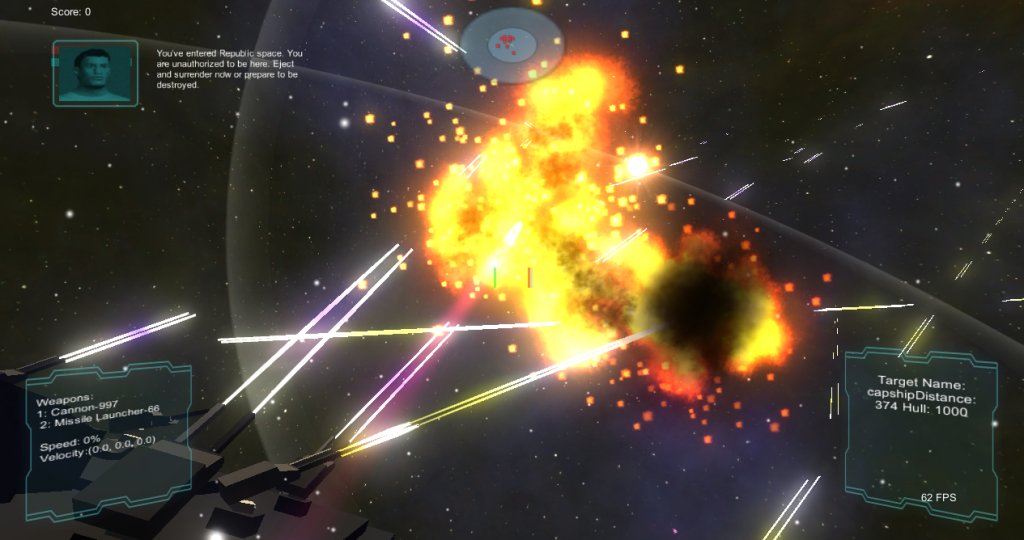 The turrets shooting the purple lasers are Point Defense turret. That explosion was once a slow moving nuke.

As you can see from the above picture, I am also working on adding some elements that will allow me to start messing around with story elements and missions.  Without comms, it’s tough to present any story or mission. The communications box will just pop in and then disappear so it’s not always interfering with view. Additionally, I am working on a Freespace 2 style ‘command’ scheme both to communicate with your fleet members and to answer back to other folks who contact you over the comm. At the moment my # keys are used for weapon equips and other usable systems, but I am going to have a comm key that enables a ‘comm’ mode for using numbered menus.

Once comms were in, I needed something to control sending comms messages. I’ll be using XML files to build missions or scenarios that will load and play out when you enter a sector or trigger something. I am thinking of them as missions and scenarios, because the story arcs will be framed more as missions, but if you are free roam and not following the main story, the game might load up various scenarios unfolding in the system you jump to so there is always something to do. So far its not too complex – we can spawn new ships and tell the player stuff.

Speaking of spawn new ships – I thought just randomly dropping ships in wasn’t cool so I gave them a warp in effect. Most fighters would probably warp in while inside a carrier, but this will do for now. I am looking forward to having a whole fleet warp in in front of a player.

UI has also been worked on. The left side info box has been cleaned up a little and now works with the weapon select feature. Shows you what weapons are equipped and how much ammo they have left. Additionally the center reticul now has the energy bar, the hull hp bar and an armor bar. I also tried dropping a model of your targeted ship in the enemy info box, but I couldn’t get it to feel just right and then my game crashed. I may end up taking screenshots of the different ship models and just make sprites for them in the UI. Behind the scenes I also have a working sector map that updates positions in real time. I plan to convert it one day to something usable like another way to give orders – certainly it will be one of the ways to do that as a Captain on a cap ship. 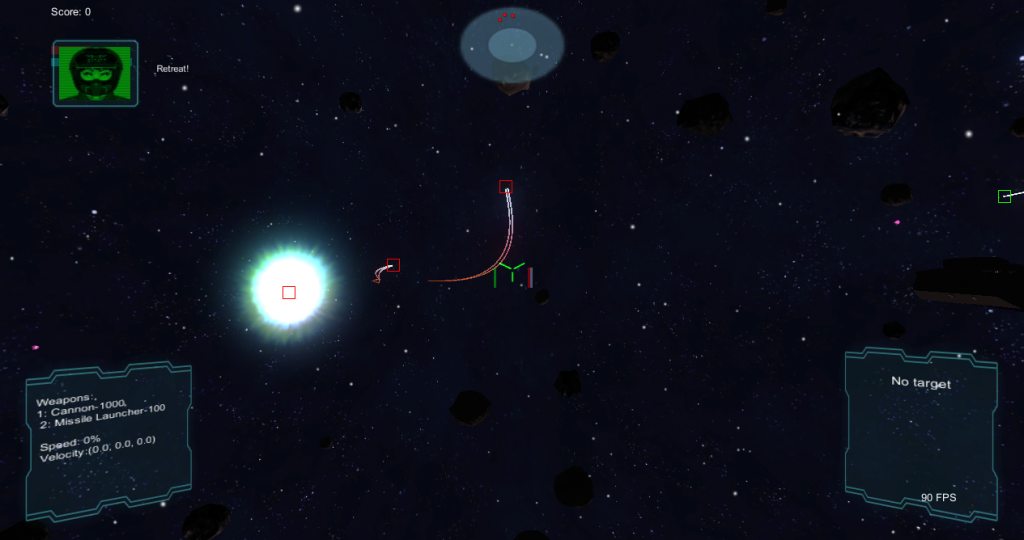 Armor was another thing I’ve added. It’s minor at the moment, but eventually it will play a big role in balance. There will be different classes of armor plate and corresponding classes of ordinance. A Class 1 projectile will lose about 25% of its expected damage against a Class 2 armor. Class 3 would reduce it to 50% and a Class 5 would basically just shrug it off with no damage. Super armored battleships might not even worry about attacks from fighters or lower class weapons. A bomber or heavy fighter with a higher armor class would have a real advantage in a dogfight against ill outfitted pirates. As for shields, I am not planning on having them on smaller ships. If you’ve been following my game dev tales, you know that I like explosions. Shield technology severely hinders the explosions:minutes ratio. Fighters and their brethren must blow up a lot. Also, I get bored when a dog fight against one enemy takes forever. Why build a high-tech spacefaring fighter jet that can’t take down its prey quickly? All fights should be quick and dangerous so shields are out for the small fries. Fly a capital ship and you can manage shields to your hearts content.

Sadly, I die far too fast to show a lot off in these videos but if you look closely you will see the capital ship’s shields and two of its turrets blowing up any incoming missiles. I’ve also added some of the new weapon features to the UI so you can see what guns are selected and watch me flip between them. There is also ammo values now which will probably make a lone fighter long for a carrier to go back to reload on–it’s coming!

I’ve been working on setting up base classes for ships and weapons which is sorta why there are lots of new projectiles and guns to choose from. I also worked on making the cap ship blow up in a cool way and might use the explosion scripts for all the explosions. I sort of simulated delayed subsequent explosions. I need to make the ship come apart next instead of just disappear tho… I’ve got a list of about 48 todos still to work on before… before I make another list…