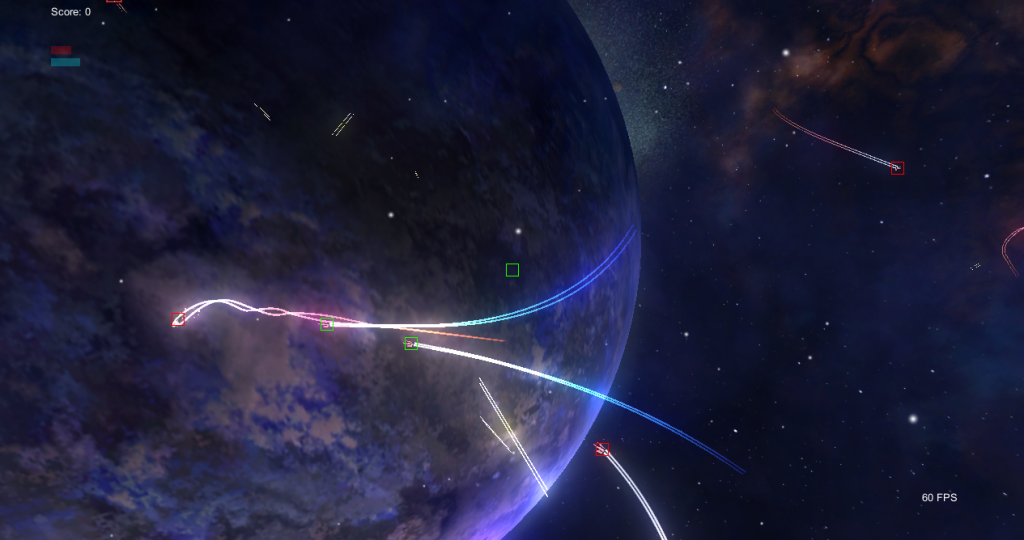 Over the past week I’ve been having a lot of fun with Space Wars, while also researching and reading about AI. (I also got a little sidetracked by trying to perfect the bloom image effect….)

AI can make a game like Space Warfare pretty exciting. I plan on having some multiplayer aspects once I get the major systems together, but the focus of the game is really a single player experience at this point. Since that is the case, cool AI pilots who behave in interesting manners is important. My actual AI code at this point needs to be refactored because it is a big mess, but the things its doing already even without a really nice organized OO state machine are pretty fun. I plan in the future to build out more of a Playmaker-esque state machine for these guys but it’ll take some focus. Because of the behaviors of the AI, the game is becoming pretty fun to watch. It has the enemies turn and loop and barrel roll to escape or ambush each other.

Current states include Chase, Attack, Reposition / Flee. Within those states the ships are able to barrel roll in reaction to being hit as well as change target focus. My idea is that I want to have some base states like Attack and then have a bunch of maneuvers that can be employed by the pilots depending on their style/personality/status. I am looking into multiple temporary short range ‘waypoints’ to create maneuvers so that AI can do looks or spiral at another ship instead of go in a straight line.

Some of my research to me to the above really cool video from Star Citizen (disclaimer: I am one man, Star Citizen will always be cooler than my game…). It hints how they are thinking about AI and displays some quick shots of the Ai engine. I can’t afford to hire that Ai company but I like some of their approaches. One of the things they really focus on is collision avoidance which made me think – oh man I don’t have anything to collide with yet other than really small ships better get to work on that! Unity’s Nav Mesh seems out because its a 2D plane and not a big open space. I’m heading towards a raycasting set up for individual ships. I forsee it being a little costly so I might have to add some collision radius objects that trigger the raycast steering only when necessary. One video that seems to explain the basics is here: http://vimeo.com/9304844. Sadly the author seems to have disappeared from the internet and never continued the series.

I’ve also implemented missiles into the game. They are basically have perfect tracting to the only way to not get hit is to accelerate long enough that they can’t catch up or have them hit or get hit by something. I am working on a few countermeasures like a ‘chaff’ like drop and perhaps flares. I know chaff is for radar, but I might make it a dual purpose item in this game. It just drops a bunch of chunks of metal behind the ship that can clog an enemy radar with blips or set off a guided missile if a chunk collides with it. The other balancing option I will add is the length of time the guidance system works. This will give the player the ability to outrun then dodge a missile over a range if the guidance cuts out early, but is still a threat if the ship remains on the same course.

When I have add the ability to upgrade, ships could by better missiles with longer range guidance systems to make them harder to shake. As it stands now, unless your opponent launches a missile from too far away, the likely outcome is an explosion. Its so likely that for the above video I needed to disable missiles just to show you the Ai fighting without immediately creaming each other with missiles. Also I wouldn’t be able to stay in one place and film for my that 10 seconds before getting hit myself.

Missiles are a powerful weapon. But I always feel they are underpowered in games. Perhaps I should make it a little more random – 10% chance of surviving a missile? Perhaps its time to add shields!? Also individual parts of ships might mean less instant kills if its not a direct hit.

On the Bloom front… well the game is shiny now! Look at the before and after! 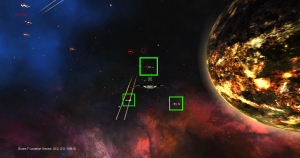 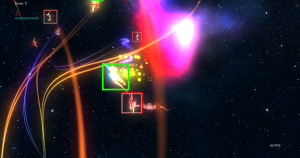 Things I’ve learned so far… some Unity image effects may be added after every camera is rendered. This means that no matter what camera you add an effect to, everything is gonna get the effect. The bloom happened on all my cameras no matter what my order was or culling set ups were. I’ve tried it all…. If someone out there reads this and finds out a way to make my findings untrue, I would love to see the solution! Comment, twitter, email me!

The main problem I’ve had is that the really nice Space for Unity scenes were getting over exposed and washed out so that you couldn’t enjoy the scenery. Since the main thing I wanted blooming were the trails and lasers, I ended up really brightening the particle materials they were using and then turning up the ‘threshold’ setting on bloom so that everything doesn’t wash out. It sort of works. I like more glowing than less so I am happy where I am with the look. Sometimes I feel like almost Bloom alone makes the Unity Pro license worth it — just the cool factor.