I am working on a survival game based on the terrain editor for Unity 3D. The idea is to have a big island to explore while collecting things to help survival. I will probably add some mystery elements to the island – treasure hunting, ancient cultures, caves to give the player more to strive for. I want to base the game on obtaining water, food, shelter and fire. Activities will include building fires and shelters, collecting water in improvised containers, crafting tools–like flint knives, spears, axes, bow drills, ropes, and rafts and containers like baskets, pottery and packs. This current demo is in the early stages, not much game play here, but I spent some time making the island somewhat life-like. It has day and night working pretty well. Here is a link to the Island survival game.

Quick EDIT: I noticed my helper text is all messed up. The beginning of the game basically says – click to pick things up or use them. Use WASD, Space and the Mouse to move. Press T to light a torch when it gets dark. You must collect three sticks for the fire. Once you do, just click the fire ring and the fire will be built.

Here is a quick tutorial I made to help some of my students and game programming club members get started in Unity 3D. The basic idea is that you can use some of the basic assets that Unity gives you to create terrain for your game world, add some nice grass textures, a sky and then drop in a player to explore! I don’t go in to too much detail about the engine, but it’s a start! Post a comment if you have a question about the video. I’ll try to make some more tutorials to help with more involved stuff in the future.

Snowpocalypse is a first-person snowball fight game where the player must fight off a never ending army of snowmen. The more snowmen you defeat, the higher your score. Completed over a week (December 9-14th) with the bulk of the work done over Monday and Tuesday’s snow days, the Snowpocalypse game was a #SnowDayGameJam test to see if I could complete a game with a given deadline. The week is up, so the game is done! Here is link to the Snowpocalypse game. 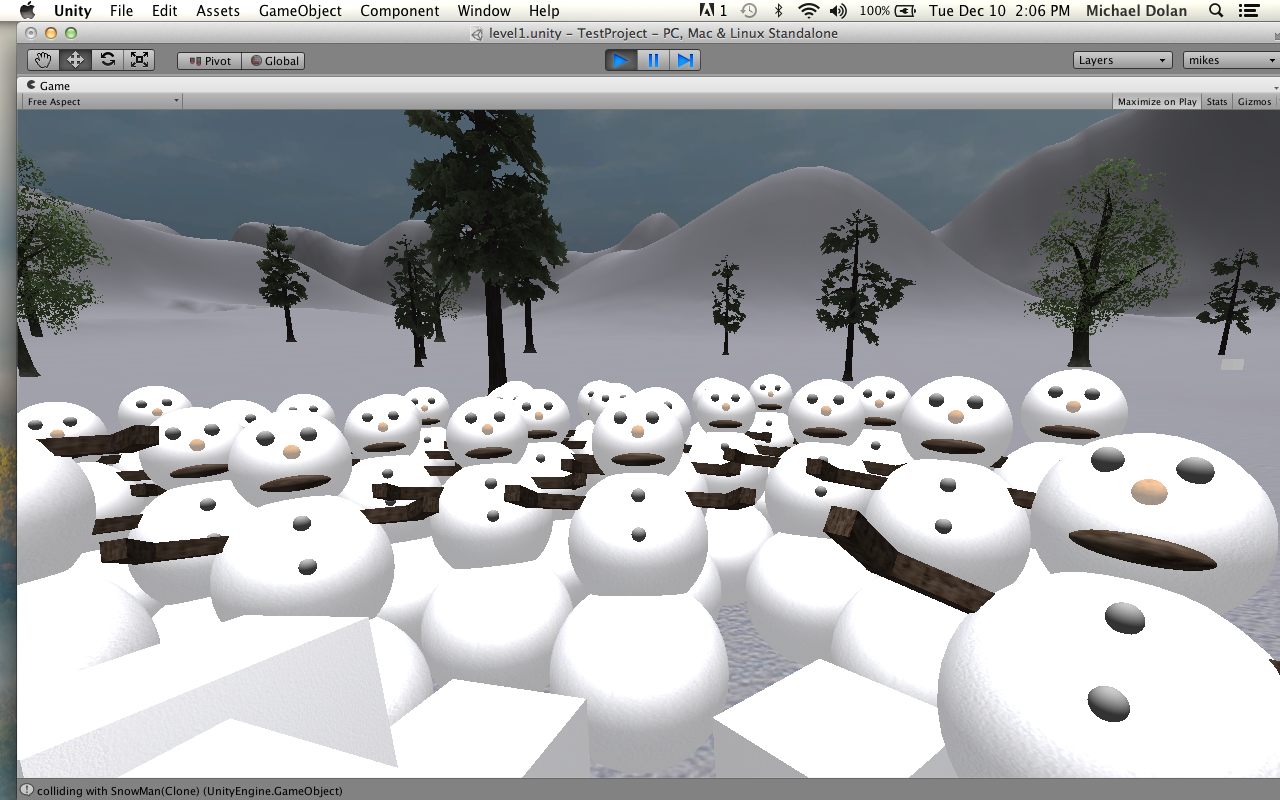 For a game done in a week, it is pretty polished, but obviously not as polished as it could be. It features a visual HUD for life and throwing power, a snowman count, score, an icon to show whether you have snowballs or snow blocks equipped. There is a title screen and a game over screen. Sound effects are present, but I couldn’t come up with music.

For future versions I would have liked to have had a more visual How to Play screen – I just ran out of time. I’d also like to vary the snowmen’s throwing angles and power either based on distance from player or randomly. I have a few ideas for additional power ups that could be in the present. Tom Brady Arm power up, snow ball airstrike, ice shield. Obviously, going beyond a survival mode and having planned levels would be cool. The AI is too simple for that right now, just chase the player — it didn’t do well when I have a massive level with big walls, the bad guys just got stuck and the player would have to find them.

The final game is pretty close to the original design idea. Some UI ideas were scrapped and I decided on unlimited snowballs. 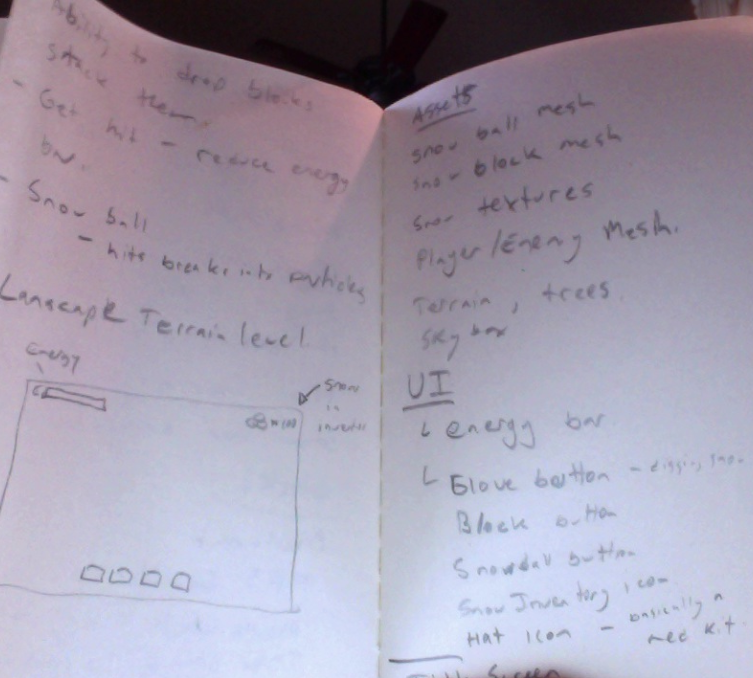 Check out the game I made over the 2 snow days:

Anyway, not a huge amount of progress really. The AI still stinks and there isn’t really a game or mission or anything but turrets and bad guys that attack and the satisfying feeling of watching the enemy explode when they get hit by a missile is nice.

I spent part of the morning playing around with Blender. I made a smallish space ship model that looks better than the flying rectangles I am currently using. I will play around some more until I have something cool. The plan is to have a good enemy model and a good capital ship model sometime soon.

The trick to Blender is watching lots of Youtube videos. I have a couple books, but watching someone model something really helps. There are not alot of helpful tutorials out there on using Blender to model machines and vehicles. People focus on sculpting characters. Getting the right info for what I am trying to do has been difficult. My biggest barrier (other than how complicated Blender is) was that I needed to understand how to use a Mirror modifier so that I could make symmetrical ships. BornCG has very helpful tutorials on Blender and one is about the Mirror modifier. Now I know how to do that! You can see the results above.

Game update: Planning on uploading a new version soon. Not sure how much longer the game will work ok in the browser. Seems to be ok so far. Recent updates have included –